Calcul Québec is very excited by the amazing scientific discovery that was announced by the Laser Interferometer Gravitational-Wave Observatory (LIGO) team. The confirmation by direct observation of the existence of gravitational waves, predicted by Einstein’s theory of general relativity a hundred years ago, is a major step for physics and we are thrilled to have played a small part in it. Canadian researcher Harald Pfeiffer and his graduate students at University of Toronto, part of the LIGO collaboration, are Calcul Québec users. The gravitational wave simulations that were used by LIGO to analyze the event observed on September 14, 2015, were performed on two of Calcul Québec’s supercomputers – Briarée and Guillimin – right here in Montreal.

Numerical Simulations Help Scientists Figure Out What to Search for 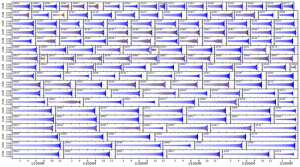 « To be able to find gravitational waves, you need to have an idea of what you are looking for. To do that, we calculated a lot of waveforms produced in various conditions. » explained Professor Pfeiffer from Toronto.
«We ran our simulations on a few thousand cores at a time. Each waveform calculation required about 200 cores, and we ran as many of them as possible in parallel. The signal detected on September 14th was so strong that we did not even need the known waveforms to differentiate the signal from the noise, and we were able to determine by comparison to calculated results the mass and spin of the two colliding black holes that generated the signal. »
The observed gravitational waves could be determined to have been produced by two colliding black holes of 36 and 29 solar masses, respectively.

A Remarkable Code for an Historic Discovery

« The scaling of their code is a marvel to behold. It scales practically linearly. » said Daniel Stubbs, an advanced research computing analyst at Calcul Québec’s Université de Montréal site. « One of the big problems in parallel computing is that sometimes, adding more cores working in parallel does not translate into the increase in speed you would expect. It’s a lot like trying to make soup in a restaurant kitchen : if you throw together 20 people instead of just one chef, the result may be disastrous. People might interfere with each other and you’ll end up taking five hours to make the same amount of soup one chef would have made in an hour, and the soup won’t even taste that good. But coordinate your kitchen staff properly, and those nineteen extra sets of hands will allow you to produce excellent soup in five minutes instead of an hour. That is particularly difficult to do with the type of calculation Professor Pfeiffer and his team are performing. They are solving sets of non-linear partial differential equations and that type of problem does not usually scale well. That in itself is a remarkable achievement. » 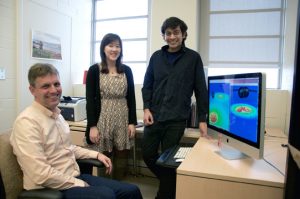 An Advanced Reasearch Computing Infrastructure Soon to be Renewed

When asked asked about his experience working with Calcul Québec’s resources, Professor Pfeiffer said: « Briarée and Gillimin are very nice machines to work with. We liked the fact that the queues were not too long. »
Professor Pfeiffer, who had been working in the United States before moving to Toronto in 2009,  noted that at the time, working in Canada gave him access to better computing resources than the ones his colleagues were using south of the border. «That situation has now inverted, with Compute Canada machines getting older, and new systems being installed in the United States. I’m hoping things will change with the new CFI investments and the new systems coming online in 2017.»

This discovery strikes a personal note with our interim General Director Suzanne Talon : « The LIGO and VIRGO experiments began at a time when I was finishing a PhD in Astrophysics in Paris, with a spouse working on numerical general relativity. We were following very closely the progression of work by the American and European teams, who were at the time still struggling with train-induced vibration! Twenty years later, I am very pleased to see that Calcul Québec’s compute servers were used to refine the theoretical calculations essential in confirming the experimental measurements. »