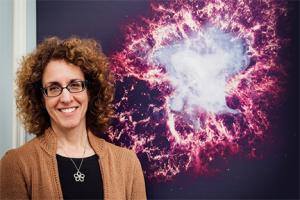 Victoria Kaspi looks at the stars, especially pulsars, which have densities far higher than any other stars. She wants to understand how such density affects matter and space-time, the fundamental principles of physics.

When a supergiant star has exhausted its nuclear fuel, there is no longer enough gas pressure produced to counter the force of gravity. The star then collapses on itself, which releases a lot of energy and causes the star to explode as a supernova. What remains of the heart of the star is so dense that the electrons and protons combine to form neutrons. Even though neutrons are extremely packed, each one can only occupy a single space. This creates enormous pressure that prevents the heart of the star to collapse further to become a black hole. That is how a neutron star is born; a star that has about one and half times the mass of the sun contained within only 10 km, which is equivalent in density to having Mount Everest in a teaspoon. 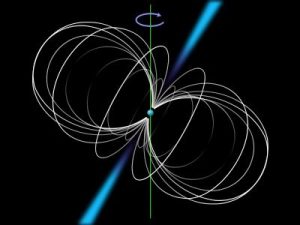 Numerical Simulation of a pulsar

Some neutron stars have a very high magnetic field, up to 12 orders of magnitude higher than that of the Earth. They emit strong electromagnetic radiation in the direction of their magnetic axis. They rotate rapidly, some taking a few seconds to make one complete revolution, others a few milliseconds. In doing so, the electromagnetic beam sweeps the sky like the light from a lighthouse. To an observer, it looks like the star flashes hence the name pulsar.

Among neutron stars we find the sub-category of “magnetars” whose magnetic field is 1000 times more intense than that of pulsars. These are the source of gamma and X rays, which are postulated to be transmitted through the cracks of the crust on the surface of the star.

Some pulsars have a very stable rotation period and are thus flashing regularly. In these cases, any delay in their flashing could indicate a change in the fabric of space-time. This type of change could be caused by the passage of gravitational waves as predicted by Einstein’s theory of relativity. These waves are caused by the loss of energy created by the movement objects of very large mass in our universe. The study of binary pulsars, consisting of a pulsar orbiting around another star, makes it possible to test this theory and to predict the behavior of orbiting stars.

The extraordinary density of neutron stars affects the nature of the matter. The internal structure of these stars is inferred from theoretical physics. All this is highly speculative and observation of these stars is necessary to find more clues. Therefore astronomers want to survey the sky to find unusually massive pulsars, or extremely rapid rotators, that could challenge current theories, hence constrain the nature of ultra dense matter.

Finally, the study of the population of pulsars informs us about their births and their interrelations with other stellar objects.

Pulsars are detectable on Earth, thanks to radio telescopes. However, they are not sensitive enough to detect all pulsars in external galaxies. It is estimated that pulsars are at least 10 times more numerous than the currently known 2000 objects. One way to identify them is through the use of supercomputers to isolate repetitive signals among the radio noise coming from the universe.

The radio band detected by the telescope must be divided by a spectrometer in a thousand channels of different frequencies recorded separately and the data must be digitalized for each time section of less than one millisecond. Following the application of various techniques of radio interference excision, the data are analyzed using fast Fourier transforms for filtering signals with a specific frequency such as those from pulsars.

Thus, using the Guillimin supercomputer, Kaspi’s team discovered 43 new pulsars in 2012 (and a dozen promising candidates). Of these, 9 have a rotation of the order of milliseconds. Since before 2012, there were 97 known galactic pulsars with rotation in the order of milliseconds, Guillimin alone, and in less than nine months, found nearly 10% of the population since the 1980s!

Kaspi’s team made many important observations. Among others, it discovered the fastest pulsar known (716 Hz). It also observed the pulsar located in the constellation of Sagittarius, at the exact center of the supernova that was observed in 386 AD by the Chinese. This last observation has questioned the previous methods of dating young pulsars by their speed.

It has established the link between pulsars and magnetars by demonstrating that anomalous X-ray pulsars show properties like magnetars.

Let us finally mention that, with her team, Kaspi observed an eclipse in a system of two pulsars that occurred when the radio emitted by one of pulsars has been absorbed by the second pulsar magnetosphere. This allowed the investigation of the structure of the magnetosphere and the plasma properties of a pulsar. This result was also significant because it allowed to verify a previously untested aspect of Einstein’s theory of General Relativity.

We wish them many new discoveries using their 2013 Resource Allocation.